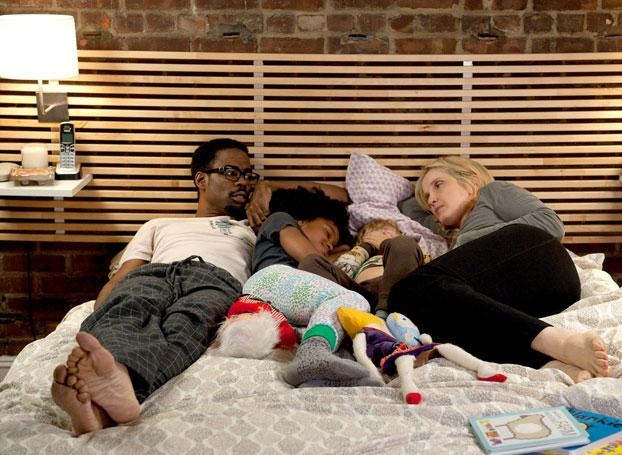 (willamette week) It’s a disservice to judge 2 Days in New York by the same standards we would its prequel, 2007’s 2 Days in Paris. Paris saw Marion (writer-director Julie Delpy) introducing her neurotic boyfriend, Jack (Adam Goldberg), not only to her eccentric parents, but also to shades of her history that made Jack reconsider their entire union. They packed a lot into those two days. There was truth to their mutual mania and the relationship’s many near-deaths beside the Seine.

It’s not that photographer Marion and her new partner, radio host Mingus (Chris Rock), are mismatched. Their problems are just less interesting in New York. There’s less time for us to witness their actual relationship, what with the chaos of a blended family (each has a child from a previous relationship; Marion’s was fathered by Jack), but the writing seems equally rushed, and the humor is predictable when the Marion/Mingus unit is put to the test by a visit from Marion’s father, Jeannot; sister Rose and Rose’s boyfriend; and, inconsequentially, Marion’s ex, Manu. The recently widowed Jeannot (Delpy’s real-life father, Albert Delpy) rises above a stock character. We knew him in Paris as gruff and unruly, but he’s more joyfully crude this time around. Manu, on the other hand, makes tired jokes that amount to “all African-Americans look the same.”

When we witness Mingus and Marion together at the beginning of the film—when they’re not forced to play exhausted straight men to Marion’s crude family—there is a definite spark that doesn’t get room to ignite anywhere else in the story. Aside from boorish statements from Marion’s guests, the fact that they’re an interracial couple isn’t even broached. There is an ease between them, but it’s one that gets unfairly manipulated for laughs.

But New York has its moments: Mingus’ hypnotic disgust at what he perceives as a very French hedonism toward food; Rose’s convenient way of disposing of her boyfriend; Marion’s change of personality around her family, as well as her photo exhibit, where she literally puts a decade of her sexual history on display. Here, perhaps, the film has grown. Sexual history isn’t a point of contention between Marion and Mingus. They have far too much else going on.