ALMOST LIVE!: WHAT SEATTLE SKETCH COMEDY GAVE TO US 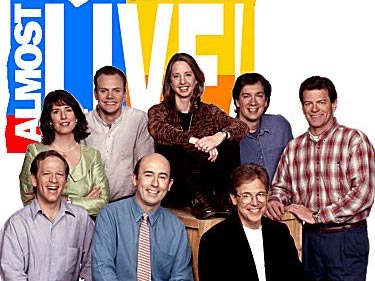 (splitsider) Long before Portlandia, there was another Pacific-Northwest-flavored offering to the world of televised sketch comedy. The production quality was choppy and star power was limited to Soundgarden cameos, but in 1992, Seattle’s Almost Live! scored prime real estate on then-fledgling Comedy Central — and it made a few of its cast members household names.

Unlike Portlandia, Almost Live!’s aesthetic was just a few cuts above public access, and the location-heavy humor was rarely universal. Neighborhood name-dropping was rampant, and jokes weren’t based on popular Seattle stereotypes, if any Seattle stereotypes were to be had (the grunge movement had yet to hit mainstream airwaves as a possible punch line). But the show that had started on Seattle NBC affiliate KING-TV found itself featured with the likes of Kids in the Hall and SNL reruns in the Comedy Central line-up.

For me, a Los Angeles native brought up on a shocking amount of Comedy Central, Almost Live! is notable by its absence from contemporary sketch comedy lovefests. Most of my old favorites are getting their due: you simply cannot escape The State alums (and thank God for that), Kids in the Hall DVDs are being reformatted and repackaged with the frequency of, say, your Lord of the Rings, and SNL, it hardly needs to be said, is still very much on TV. But outside of the Emerald City, Almost Live! is little more than a fever dream for early-’90s cable subscribers.

Almost Live!’s humor was more accessible than absurdist (“Worst Girlfriend in the World,” anyone?), but the half-hour show produced its share of successful routines. Take, for example, “The Lame List” (or “What’s Weak this Week”). Many of Seattle’s hair band elite gathered to voice their monosyllabic opinions on hot-button cultural issues and grievances, including (but not limited to) “Christian heavy metal bands,” “girls who won’t pick you up at 3 am,” “the great taste of beer without the alcohol,” and “KISS not playing at Clinton’s inauguration.” In each installment, the grubby panel voices unanimous disapproval on each question (with a variant of the verdict “lame”), before getting tripped up on a more complex question about international policy or Shakespearean theory.

Yet the show’s greatest cultural contribution may not have been to comedy, but to the sciences. WithoutAlmost Live!, the world might have fewer chemistry majors, and graduating classes in the early ‘oughts might have settled for less compelling commencement addresses, for it was on the set of Almost Live! that Bill Nye the Science Guy was introduced to the world.

As the story goes, Nye, a Boeing-employee-turned-performer, corrected show host John Keister on his pronunciation of “gigawatt,” and the nickname was born with Keister’s sarcastic retort, “Who do you think you are — Bill Nye the Science Guy?” Soon after, Science Guy made his debut in lab coat and silk tie. He would make the move to Disney, PBS, and a bow tie three years later, but Almost Live!’s segments served as an audition for Nye’s live-action stint on Back to the Future: The Animated Series, where he played a Teller-like lab assistant to Christopher Lloyd’s Doc Brown, thereby gaining more network exposure.

On Almost Live!, early Science Guy sketches provided a pleasant pause amidst the parody. Early Science Guy segments play on Keister’s friendly awe of Nye, and the humor is less about instant gratification, more about the comedic gold of one man’s passion for the surreal pleasures of chemistry.

With Science Guy cemented as a popular host and educator, Nye managed to snag two fellow Almost Live!alums for his new show: cast member Pat Cashman (who became his announcer), and ornery kids’ show personality Uncle Fran, whose acoustic performances went from bad-mouthing his ex-wife (on Almost Live!) to strumming about the food web.

After his multi-network success as an educator and pop culture icon, Nye would continue to drop by Almost Live! to give the audience the lessons on photogenic chemical reactions. But he wasn’t the only cast member to get a career boost from that Seattle stage: former Mercer Island resident Joel McHale spent his early twenties in the Almost Live! cast, playing an inordinate number of game show contestants. Although he didn’t crowd-test any standout personas, he arguably cut his parody chops while acting as occasional correspondent for Keister’s take on the “Weekend Update” formula, showing the unmistakable (if sarcastic) panache he would later bring to The Soup.

Another familiar face was Lauren Weedman, later destined for an anxiety-ridden turn on The Daily Show. Performing for her hometown audience gave Weedman an opportunity to showcase the frenetic stage presence that would (by her account) cut short her career as a fake news correspondent, but which would later win her rave reviews for her autobiographical one-woman shows.

But for all that, Almost Live! remains a footnote. The show’s re-descent into obscurity can partly be explained by the number of times I (as a burgeoning-if-prepubescent comedy nerd) had to turn from the TV to ask my mother where, say, Ballard was. (She hadn’t a clue.) Sketches like “Cops in Mercer Island” didn’t necessarily land if you were unfamiliar with the affluent suburb. But for every missed local reference, there was a speed-walking superhero or a deft send-up to “This Old House.”

Despite its short life on Comedy Central, Almost Live! ran for 15 years, only to be unceremoniously canceled when KING-TV changed owners. It was time, Keister would say in an interview with Seattle PI several years later. He complained that in place of the city’s once-distinctive subcultures — the boho bums and the Scandinavian suburbanites, say — Seattle in 1999 was increasingly defined by a new population of “wealthy people who work in the information industry.”

So it would seem the High Fivin’ White Guys had become less of a joke, more of a profile.