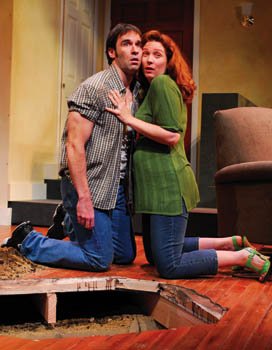 (ventura county reporter) The parlor drama format gets a serious overhaul at the Rubicon, transforming from staid period piece to volatile exploration of human motivation in a suburban tract home. And the only collateral damage appears to be a gaping hole in living room floor.

The world premiere of Mark Stein’s Bad Apples ostensibly pits the law-abiding against the law-breaking and -bending. Two high school sweethearts — the bookish Brook (Eric Lange) and bad-girl preacher’s daughter Peg (Precious Chong) — rent out a tract home in a middle-class Midwest neighborhood, using games of bridge and a malapropos devotion to Budweiser to look the normal couple. In actuality, they are harboring Brook’s jailbird buddy Eddie (Patrick Hallahan) as he digs a hole through their floorboards, plotting to free his incarcerated ladylove, Billie.

The androgynous quality of each of the major player’s names doesn’t appear to be an accident, as romantic preference and favor swaps frequently between the characters.

Meanwhile, Ida (Clarinda Ross), a nosy neighbor who just happens to be wife of the chief of police, is introduced as the would-be Gladys Kravitz. But her willingness to drink heavily, midday, with Peg chips away at her busybody cred as she becomes increasingly implicated into the makeshift family’s schemes.

Although Eddie’s presence in (and underneath) the house is explained away with a flimsy reference to a crack in the foundation, the dusty man’s constant shift between two worlds — the legitimate above-ground, the illicit below; light and dark — takes us precariously close to the realm of magical realism.

Moving away from a more alternative explanation for this reality, Stein deftly allows this lie to wear his characters down and throw their neat arrangement off-balance. A prison visit to Billie yields unsavory trivia about Brook, and in this isolated, claustrophobic situation, Peg turns to Eddie for solace. Brook begins to question the point of their caper.

But this, too, is the play’s weakness. Mark Stein claims to have set out penning Bad Apples to explore the phenomenon of “bad guys” and the disconcerting effect of rooting for them. But although Peg, Brook and Eddie’s morality is a slightly warped take on mainstream America’s, it is not so far removed that the group of reprobates is inaccessible to the more ethics-centered among us (their nebulous arrangement is increasingly seductive to WASPy domestic goddess Ida, after all). Yet their behavior with one another, where partner-swapping seems half a step away, and where the façade of suburban normalcy is the only thing keeping this ragtag urban family in check, is at odds. We are not asked to suspend our sense of right and wrong entirely, but we are expected to suspend our ideas of how people function in romantic relationships, and of how elastic loyalty can truly be.

Chong, Hallahan, Lange and Ross are above reproach. Chong is pitch-perfect as an accomplice uncertain of her own intelligence, demanding credit for her role in the scheme and slowly piecing together her personal history in an attempt to move past high school. Lange as a clueless but well-meaning mastermind lends a daffy sensitivity to the role and makes the transition from leader to pawn credible. A last-minute change of sentiment that could have done with a touch more buildup is ably covered by Hallahan, who fleshes out the extremely emotional ex-con looking for a little love. Ross embraces (forgive me) the role of desperate housewife, potentially the most wily and unpredictable of the bunch.

Despite extensive workshops and readings and revisions, a new play needs several dozen rounds of test audiences to come into its own. Bad Apples’ at times far-fetched logic is the only misstep in an otherwise crackling script with witty (but believable) banter and a charming parfait of character development. The spectacle of a hole in a tract home living room (complete with mounds of dirt surrounding it), and the constant interruption of a man in the hole, is too whimsical not to endear.