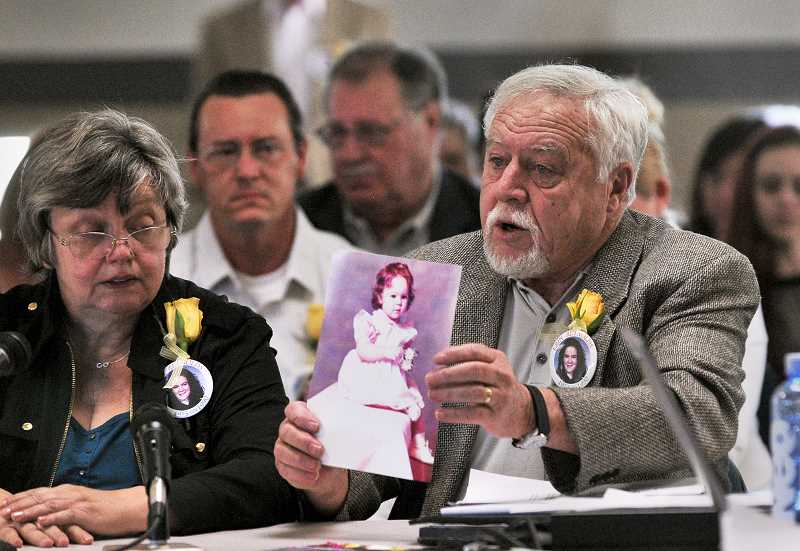 Earl Reynolds shows the state parole board a photo of his daughter, Erin, as a baby while his wife Pam looks on. Erin was 16 when she was murdered by classmate Conrad Engweiler. Photo: Vern Uyetake

(the review) A repurposed visitors center at the Oregon State Correctional Institution in Salem hosted an unpleasant reunion of sorts Tuesday for supporters of Lake Oswego native Conrad Engweiler, 40, and the family and friends of a high school classmate he was convicted of raping and murdering in 1991.

“Twenty-four years ago, he tossed Erin just like yard debris,” Beth Greear, the victim’s stepsister, later testified of Engweiler. She described to the parole board the pain of holding a funeral for the victim amid police tape at the family’s home, and how Engweiler’s attempts at release had caused her and her family to “live the last 15 years constantly on edge.”

Supporters of Engweiler and supporters of the victim sat across the aisle from each other as Engweiler was led in, cuffed and shackled, to sit at the table before state parole board members Kristin Winges-Yanez, Michael Wu and Sid Thompson and argue for early his release.

Engweiler spoke articulately when asked to recount the day he raped and murdered 16-year-old Erin Reynolds. His composure did not go over well with board members, who several times probed for greater emotional insight from him.

Board members also stated they did not feel they were getting an accurate read on Engweiler.

Winges-Yanez asked Engweiler how many times he had talked about the events of Feb. 20, 1990, to which Engweiler replied, “Three, maybe four.”

“You speak about [them] in sort of a matter-of-fact tone,” Winges-Yanez said.

“I want to be direct with the board,” Engweiler replied. “I’m absolutely struggling right now, but it’s more important to present the facts than display hyper-emotionalism.”

Engweiler appeared calm as he recounted the last day of Reynolds’ life. His father had dropped him off at Sunset High School in Beaverton, he said, and reminded him of the terms of what Engweiler called his “informal probation,” the result of stealing his father’s car and his grandmother’s credit card. Engweiler was 15. Once on campus, he decided to leave again, as was his habit.

By then he’d missed about three weeks of school and was anticipating a “family confrontation” that evening. He was also looking at a couple weekends in a juvenile detention center.

So he decided to steal Reynolds’ car and run away to Mexico.

Engweiler said he waited outside the Reynolds home, and when Erin returned after school, he asked her for a ride. She agreed.

On the way, “she reminded me I was being an idiot” for skipping school, he said.

In the driveway of his father’s house, Engweiler demanded Reynolds’ keys. She refused, threw the keys into the bushes and attempted to flee. He kicked at her door, forced her out of the car and, holding a knife his father used for landscaping, immediately attempted to tie Reynolds up with a rope.

“I chased her down, and I struck her repeatedly. I brought her back to the car, screaming at her,” Engweiler said.

Reynolds promised Engweiler she wouldn’t tell anyone about his behavior.

It was at that point Engweiler said he began his sexual assault.

After an unsuccessful attempt to hotwire Reynolds’ vehicle, Engweiler forced Reynolds into the backseat of her car, where he raped her.

“We sat in the front seat,” Engweiler said. “Erin was crying.”

He pulled her out of the car, then told her to put her hands behind her back and turn away from him.

“At that point I put rope around her neck and strangled her to death,” Engweiler stated.

After a long silence, he added, “The crime wasn’t finished there. I then dragged her behind the house, hit her in the head with a vodka bottle, returned to the front of the house and tried again to hotwire the car.”

Parole board chair Winges-Yanez asked Engweiler repeatedly to explain his rage, and Wu repeatedly questioned Engweiler about what he termed “a monstrous escalation from stealing a car.”

In an even tone that suggested both perspective and detachment, Engweiler described himself at 15 as a kid emotionally disconnected from the world around him.

“From about 11, I had been avoidant of the consequences” of “antisocial behavior,” he said.

At 15 he had a significant rap sheet, but his crimes were nonviolent. Wu questioned him about his brutal turn against Reynolds.

There were no witnesses to his previous acts of theft and vandalism until after the fact, Engweiler replied. But Erin saw him attempt to steal a car.

“So why the sex crime?” Winges-Yanez asked.

“It was an act of aggression,” Engweiler replied.

“To engage in this series of torturous acts, it seems as if you must have had some plan,” Winges-Yanez later observed.

“I was an unrational, unrational child, and impulsive as heck,” Engweiler said.

Engweiler went on to describe his complex “denial mechanism,” saying that Erin’s presence made it impossible for him to escape what he was doing.

“I’d inhibited guilt and shame before,” he said.

Thompson pressed Engweiler about hitting Reynolds in the head with an empty vodka bottle, even after she was clearly dead.

“That speaks to another level of rage,” Thompson said. “It’s difficult for me to understand — you speak of it articulately, and you look cold and removed.”

Thompson added, “The confounding issue is, (the problems you’re describing) were basically the trials of a teenager. Getting from point A to B in this case is difficult.”

Engweiler claimed the murder — or another crime of that severity — was inevitable, as long as he was disconnected from his emotions.

But Engweiler emphasized that he had changed over the past 24 years.

“What have you done to mitigate the person (you were) in 1991?” Thompson asked.

“I’m emotionally grounded in relationships,” Engweiler said. “I’m responsible. I don’t lie. I don’t use and abuse drugs. I’m organized in my activities. You can trust me.”

He added, “I’ve developed a genuine sense of responsibility.”

“Have you accepted you stole this young woman’s life?” Wu asked.

Engweiler’s initial sentence was a minimum of 30 years, but his case has been complicated by his dubious distinction of being one of the infamous Oregon Five, a group of juveniles convicted of aggravated murder before comprehensive parole guidelines were in place. In 1999, the Oregon Board of Parole determined that each could be required to serve up to 40 years before being eligible for so much as a parole hearing, a decision the state Supreme Court struck down in 2011.

If released, Engweiler will remain on parole for life, and will be required to register as a sex offender.

She asked him if he had maintained any significant relationships while in prison.

“I’ve felt it inappropriate to maintain romantic relationships,” Engweiler said, adding that he had some long-term pen pals.

“It feels like every new relationship requires a confession, an atonement,” he said.

“You have an incredible debt to the community here, and certainly to Ms. Reynolds’ family,” she said.

Engweiler agreed, and said that if he was released, he would attempt to repay the debt in part by maintaining his sobriety. Although he has since recanted his testimony in 1990 that he was high on LSD when he killed Reynolds, he has admitted to struggling with alcoholism and substance abuse issues.

“We’ve received a lot of communications” from the victims’ family and friends,” Winges-Yanez said. “You read those letters. How do you live with that on a daily basis?”

“By being responsible for the suffering,” Engweiler said. “You just sit with it.”

In closing, Thompson offered an observation.

“Throughout the course of this hearing, after reading your parole plan, (it’s evident) you like to be in control of your environment,” he said. “What concerns me is that parole conditions are not negotiable items.”

Ratto reminded the board that shortly before her murder, Reynolds had finished a years-long battle with cancer.

“She was a very vulnerable victim,” he said, and cited a medical examiner’s report that as a result of Engweiler’s assault, staples along Reynolds’ scalp from a recent surgery to remove melanoma had been entirely ripped out.

“We know he bragged of committing this crime while at (the juvenile detention center),” Ratto said, arguing Engweiler could not be rehabilitated. “Current psychological reports show this capacity remains in Mr. Engweiler.”

He asked the board to deny Engweiler his parole.

“He hasn’t changed with age,” Ratto said. “He’s just become smarter at hiding who he is.”

Before the parole board members arrived, Reynolds’ supporters met with a victims advocate in a room off the main hall in the visitors’ center, where many affixed large buttons with Reynolds’ name and photo to their lapels.

After the board concluded its interview, they heard testimony from Reynolds’ best friend, brother, stepbrother, stepsister, stepmother and father.

Engweiler appeared quietly pained and even near tears as Reynolds’ father, Earl, read a poem about his sorrow.

“This young man has learned a lot of new words, he filled in the blanks,” he said, pointing at Engweiler. “(But) the young man who killed our daughter lives in that man right there.”

Winges-Yanez’s voice shook as she thanked the victims for speaking, and offered Engweiler a chance to respond. He declined.

Endorsement for Engweiler’s release came from an unlikely source: psychologist Orin Bolstad. Bolstad had initially testified on behalf of the state against Engweiler during the 1990 murder trial, recommending that the then-high schooler be remanded to adult court.

“I felt from the onset this was one of the more egregious [cases],” Bolstad said of his earliest evaluations of Engweiler, adding that he found the boy “cold and callous.”

“I was upset by his lack of empathy and remorse,” Bolstad said. “I did not feel he was amenable to freedom.”

His opinion began to change based in part on a colleague’s experiences with Engweiler in 1994. During one session, Engweiler displayed “a flood of emotions,” and was subsequently put on suicide watch. He endured a three-month depression, Bolstad said.

Addressing accusations that Engweiler remained cold, Bolstad told the board that emotional expression differs from person to person.

“I’ve met young men who expressed their emotions by their ears turning red,” he said.

To date, Bolstad has evaluated Engweiler four times, and said he has seen Engweiler cry in half of those sessions.

Bolstad pointed out that all three of Engweiler’s recent evaluators judged him ready for parole. He said he found Engweiler to be at low risk of reoffending.

Winges-Yanez asked for patience on both sides as the parole board retired to consider if Engweiler continues to present a danger to the community, or if he should be released after 23 years in prison. The decision is pending.