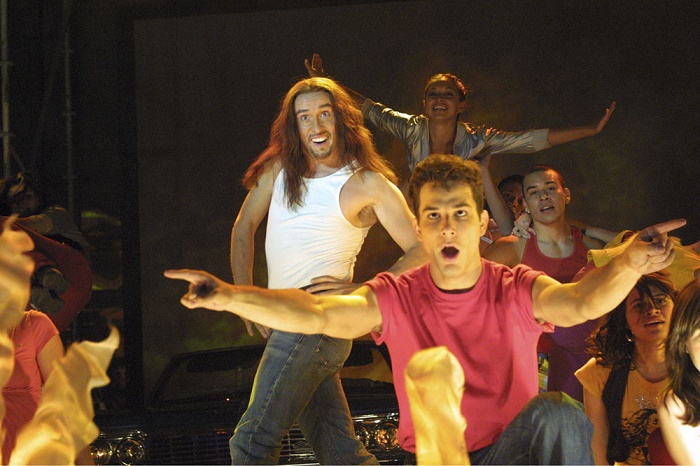 (willamette week) Steve Coogan is the master of center-stage asshattery.

In his popular British series Knowing Me, Knowing You…with Alan Partridge, Coogan was a tactless, ABBA-obsessed talk show host who famously ended his career on telly by fatally shooting one of his guests on air. But with the exception of an awkward cafe date with distant cousin Alfred Molina in Jim Jarmusch’s Coffee and Cigarettes, it would appear most of his work on American screens demands he soften his comedic bite.

Coogan gnaws quite effectively on writer-director Andrew Fleming’s script for Hamlet 2. In place of an arrogant blowhard, Coogan is reduced to the drama teacher who cares a little too much and is painfully oblivious to the way his effeminate enthusiasm alienates his students. But even through his spot-on (if fey) American accent, Coogan delivers his lines with subtle British panache, and he approaches his role of New Age sensitive everyman with the skill of, say, a classically trained Shakespearean actor. And like a valiant attempt at Richard III staged by a community troupe, Hamlet 2 comes within spitting distance of being a sharp production.

Coogan plays Dana Marschz, a recovering alcoholic who rollerblades to work in Tucson, Ariz., and takes to wearing a caftan when his wife (Catherine Keener) worries that his sperm count is too low for them to conceive. Marschz directs annual stage adaptations of high-grossing Hollywood flicks (we’re treated to a scene from Erin Brockovich in a high school cafetorium) until budget cuts threaten his entire program.

In his attempt to win over a street-wizened crew of Latino misfits compelled to take his class, Marschz makes the predictable missteps in trying to relate. The film starts to redeem itself by getting self-referential (“Have you all seen Mr. Holland’s Opus?” Marschz queries), and, naturally, the students come around in time to stage Marschz’s personal composition: the eponymous Hamlet 2, which attempts to both resurrect the characters and heal Marschz’s daddy issues. And after we suffer through director Fleming (most notable for penning Nancy Drew and The Craft) getting the necessary pratfalls and slapstick out of his system, with Coogan as his foil, things finally get a bit interesting.

Marschz’s Hamlet 2 is staged with pomp and pyrotechnics, using the pretense that a time machine has brought all the main players back from their original tragedy. Fleming hits his stride here, doing the flick’s premise—and his actors, including Elisabeth Shue as Elisabeth Shue—justice at long last. For a director who felt an overwhelming urge to employ lowbrow comedy clichés (harpy wife, public freeballing), Fleming is pleasantly subdued in his presentation of what exactly Hamlet 2 is. He treats us to a highlights reel, and we discover that Albert Einstein makes a cameo and Jesus Christ gets his own greaser-style number (the rollicking “Rock Me, Sexy Jesus”), but we are never entirely sure what the hell happens, only that Hamlet is given a chance to set everything right. And that a lot of it is set to New Wave.

Controversy surrounding the school production picks up momentum, with parents objecting as much to the questionable quality of the writing as they do to the sacrilegious content. As the community rumor mill picks up steam, so does the acidity of the film—it becomes downright unabashed, as when Amy Poehler, as a steel-toed American Civil Liberties Union lawyer, attempts to incite an angry mob by proclaiming, “I’m married to a Jew, I have nothing to lose.”

Troubled source material aside, Hamlet 2 the movie—much like Hamlet 2 the play—succeeds on the presence of Coogan and a handful of earnest young players. It plays to formula: Racial tension and initial misunderstandings are resolved, and even the most hardened vatos find joy in live theater as the small-time drama teacher (with an impressive TV résumé under his belt) justifies his existence. And the movie finally catches up with itself when Coogan, finally granted permission to be in on the joke, tells a student, “You have a magical life ahead of you, because wherever you go, it will be better than Tucson.”