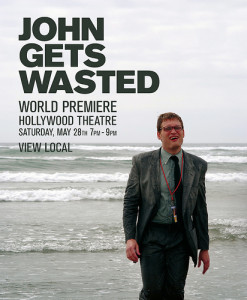 (willamette week) Awkward pauses and uneven film quality? These are hallmarks of any flick making the transition from film school assignment to solid indie. Unfortunately, the first full-length offering from local Paycheck to Paycheck Productions lives in an unpleasant limbo where nearly-competent film composition enables bad taste. Still, the Kickstarted brainchild of proud Videorama colleagues Christopher Tucker and Will LP soldiers on as a giddily failed experiment. When the titular John is given the mixed blessing of unemployment, it relieves him of a grueling daily trek to Beaverton but delivers him straight to identity crisis and, somewhat unbelievably, his first-ever high. What follows is a fond visual ode (limerick?) to Portland, with a frat house sensibility. But poor performances from Tucker (as John), his coke-addled vixen, and the supporting cast make Wasted a pretty apt description of John’s odyssey of excess—though to be fair, it also provides a pretty accurate view of Portland through the hazy lens of one’s first crystal meth experience. It’s as though Tucker and LP wondered why Office Space shied away from a valuable psychoactive drug subplot, and filled the gaps in for themselves. They picked a lovely setting.