When women had wings 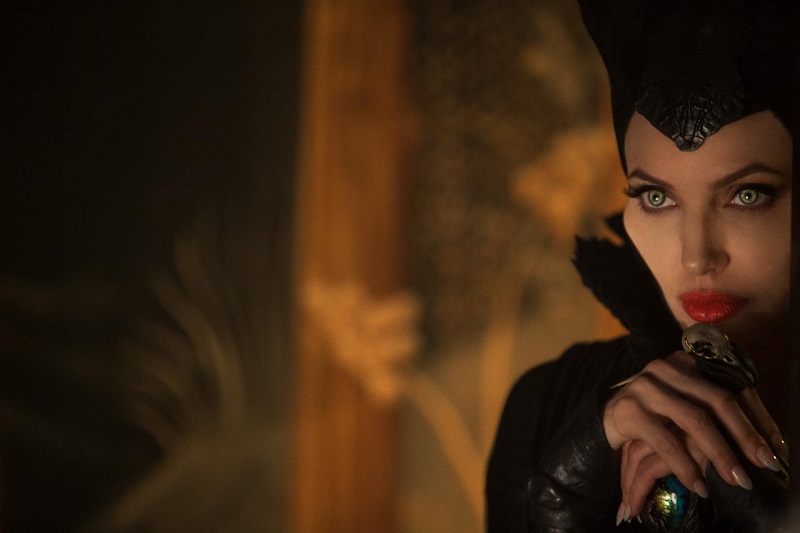 (willamette week) I do not go willingly into that uncanny valley, and I do not slap on a pair of 3D glasses without some reluctance. That said, I’ll hand it to Maleficent: Its overdependence on CGI actually makes sense. All the better to self-parody with.

The familiar visual touchstones are all there in this revisionist retelling of Disney’s 1959 Sleeping Beauty, with a fever dream edge. The gothic good looks of the eponymous villain are punctuated by effervescent green swamp gas, which was always her calling card, and there’s even a lumpy-ass cake as a callback, at Princess Aurora’s 16th birthday—a reminder of her fairy godmothers’ benevolent incompetence.

In case your grasp of the source material is rusty, the princess Aurora had a death curse slapped on her soon after birth. The evil fairy Maleficent sweeps in, slighted because she was left off an invite list to the little girl’s christening. As a present, she gives the princess charm and beauty—but for only 16 years, at which point Aurora is destined to prick her finger and fall down dead.

But we do not believe in pure evil these days, and Disney was not content to let such a tunnel-visioned villain go unconsidered. Angelina Jolie has lent her prominent cheekbones—and intimidating beauty, and sense of physical imposition—to the role. She does humanize Maleficent while looking like a living, near-fire-breathing, three-dimensional version of the literal dragon lady. (The animation department leaves her more or less alone to do her thing, so the only human actors to get the queasy CGI treatment are those playing the fairy trio, which are included in the film almost as an afterthought).

So what hardened Maleficent’s heart? Rape. Which, again, is a good call-back to source material. The story of Sleeping Beauty in its many iterations is a story that wrestles with consent. One of the earliest recorded versions of the story tells of a comatose princess raped by the king she was set to marry; even at its most sanitized, this is a fairy tale that asks us to trust that the kiss destined to wake the princess will be from a desirable suitor—a pretty hefty suspension of disbelief.

But the rape here is Maleficent’s. The man who would be Sleeping Beauty’s father begins as Maleficent’s childhood chum and first kiss, sneaking across an unfriendly border into the realm of the fairyland. He drugs Maleficent and removes her wings to get a little geopolitical advantage and, eventually, the throne. The implications are mind-boggling, but Jolie only gets the chance to play a seething jilted lover who exacts her revenge on the most helpless of the kingdom. Abuse begets abuse. She lost her edge when she lost her wings.

But we can’t give Disney a pass, because by the time Maleficent regains her wings, the dark one’s trajectory and the movie’s message have all become so muddled that, at what passes for the climax, we get a battle scene reminiscent of Catwoman—Jolie loses her skirt, gets pants, and slings chains at her erstwhile lover, King Stephen. It doesn’t feel like victory, though: It feels forced after tiptoeing through the computer-animated tulips.

More charmingly, Jolie stalks the doomed Princess Aurora throughout the little girl’s childhood, and something like maternal love stirs in Maleficent’s cold, dessicated heart (at this point, with the heavy-handed imagery of violation and loss, we can assume the statuesque fairy is also barren). Maleficent spends most of Aurora’s early years beating her breast, cursing the day she cursed her ex’s spawn.

And so she becomes Aurora’s salvation, because only true love’s kiss can awaken the princess once she falls under—but guys! There’s so much more out there than romantic love, you feel me?

Elle Fanning as Princess Aurora gets maybe seven minutes of screentime in slumber, and she’s jolted awake by a loving peck to the forehead from Jolie (the mind reels at the kind of slash fiction that will soon be populating the not-so-far reaches of the internet).

The thing is, fairy tales have a way of acting as allegories. They’re instructive, or at least reflective of things like human development and, fuck it, the psyche, let’s say. So while it warms the cockles of this reviewer’s desiccated but also easily manipulated heart, the rewrite makes no sense. In his Uses of Enchantment, psychologist Bruno Bettelheim made a pretty convincing case that “Sleeping Beauty” is about puberty and, ultimately, sexual maturity—and all the ways well-meaning parents try to stave off that moment. When the king attempts to hide away his daughter so she will never prick her finger and fall under the predicted curse, Bettelheim points out, it’s as if he’s trying to prevent menstruation. Left to sleep for the traditional 100 years, the princess also sleeps through hoards of suitors trying to fight their way (often, the thorny way) through the castle. They fail because she’s simply not ready. Sexually, let’s say.

Without going deeper into Bettelheim (he also points out the phallic nature of the spindle needle, for example), the tale does hold up as a parable for puberty. That’s not to say that Maleficent’s turn as protector isn’t touching, but my point is this: When Maleficent is robbed of her wings, she becomes a delectably evil force of vengeance. And when Disney attempts to flip its own script, and shorten the princess’s nap, and give us a frankly charisma-free prince, it all plays off as apologism. Sexy, sexy apologism, but pointless apologism nonetheless.