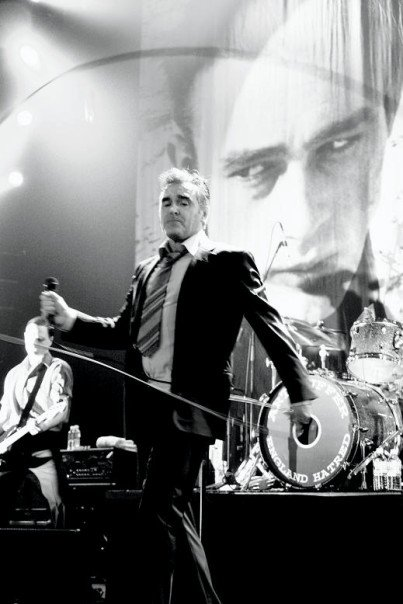 (ventura county reporter) From the shaven-headed construction workers running lines off their knuckles to the retro-fabulous, downtown Ventura-chic ladies in gingham and platforms (one with an actual Morrissey tattoo peaking from her back), the fan base that congregated at the Ventura Theater on June 5 proved that the long arm of Moz embraces nearly every conceivable counter-culture clique.

To European audiences, the Smiths and their frontman are an alt-rock institution still heavily embedded in popular culture, despite the fact that their five-year tenure ended before the ’80s did. Drawing on dismal, industrial city malaise, exploring themes of longing and inevitable letdown, the guitar-heavy alliance brought pop back from a slow, synthesized death and helped reaffirm Manchester’s place on the new wave map. Headed by an angularly handsome Irishman with the demeanor and lexicon of a heartbroken English major, the Smiths were both literate and lurid.

To American audiences, the Smiths had cult appeal. Underappreciated by U.S. markets, the band became tangentially associated with newer, younger punk movements, despite Morrissey’s charmingly decadent stage personae. Morrissey himself has gained (and retained) a devoted following among Latino youths, and through his run in the public eye has courted controversy for his criticism of political figures both American and Anglo, his stance on animal rights activism (any means necessary) and his high-profile fallouts with fellow Smiths alumni.

But the paradoxical icon was in top, stylish form on the Ventura stage. A fit 48 years old, graying but with the same rockabilly charm that made him an ambiguous sex symbol (or, at the very least, an object of lust for similarly ambivalent youth), Morrissey was backed by a trusty selection of uniform, virile man-boys in work shirts — and a gong, for good measure. He opened with newer fare but quickly transitioned into the deceptively upbeat “Last of the International Playboys,” instantly uniting the converted in a unison chorus.

His newer material was solid but too soft on the nostalgia, and Morrissey only fully hit his stride when he embraced his older standards. Due to the performer’s energy, underscored by countless trips backstage to change drenched shirts, “Everyday is Like Sunday” overshadowed his harder, more metal-tinged selections from earlier in the set. This was followed, eventually, by “Please, Please, Please, Let Me Get What I Want,” where his rich baritone and occasional falsetto never waned, and with the addition of a horn, retained a pathetically bittersweet buzz. “How Soon Is Now” was dragged out with a quick word about its commercial success and was met by a begrudging feeling of loyalty in the crowd.

The man did show his age on occasion: As per a bizarre ritual well known in Morrissey-worshipping circles, the security staff had their hands full with ardent followers leaping onstage and rushing Moz in an attempt to kiss his cheek. Morrissey has generally been a party to this, but where once he might have lyrically taunted and encouraged the throngs to hop up onstage, he now bore it with bemusement and ultimately a quick trip backstage.