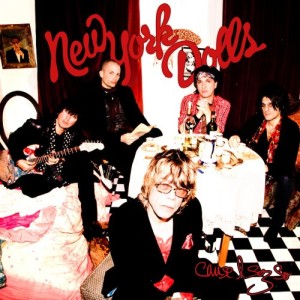 ‘Cause I Sez So

(venuszine) The Dr. Frank-N-Furter-esque makeup is long gone (as are the halter tops) but by all reports, the New York Dolls put on a reunion tour that feels as good as the maiden voyage. And luckily, even in their new incarnation — with thespian rocker David Johansen and guitar demi-god Syl Sylvain enjoying a more lasting tenure with a fresh lineup — it translates well; especially with Todd Rundgren once again behind the dials on ‘Cause I Sez So.

Often considered the lipsticked granddaddies of punk (or perhaps the cooler, slightly older brothers who introduced punk to a more expansive world), the Dolls simultaneously existed in the era of glittery glam rock — the prettiest, snarling girls at the dance — while schooling it. They return, cocksure as ever, rebellious and romantic (tapping into the magic of the bitterly sentimental Dolls’ staple, “Looking For a Kiss”), with just the occasional lyrical nod to aging. “Better Than You” plays out as a modern take on defending a woman’s (and one’s own) honor, as Johansen proclaims, “I’m gonna see my baby / Find out how she’s getting along / Here in the twilight of destiny’s last days,” and adds, “She says my music’s / Much better than it sounds,” subtly tapping into the Dolls’ mythology.

The opening namesake riff does justice to the band, but it’s standouts like “Temptation To Exist” that push the album beyond “we still got it” territory into a new release worth passing around as an introduction to the uninitiated. Syl Sylvain bends the steel guitar to his will to craft the swagger of a classic, gritty western; add the earthy drawl of Johansen’s best cowboy crooning, and the innovation keeps going until album closer, “Exorcism Of Despair.” For one glorious track near last call, the boys revisit the piss-and-blood-stained clubs of their early days — then dial it down a couple notches, revamping a flagship song from a call-and-response rager into a circumspect love song, set in the key of reggae.