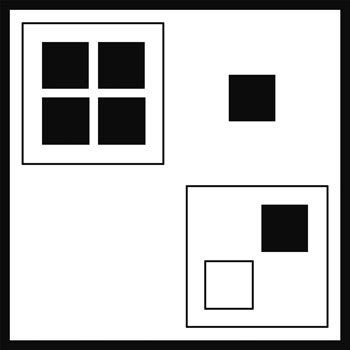 (ventura county reporter) On the day of an election which did, indeed, prove to be a major shift, Paul Benavidez of the Upfront Gallery considered that never has there been a better time for a fusion of art and science.

“We just may be at the beginning of a new paradigm,” he considers, speaking not only of the art world but of global civilization at large.

Dots and Boxes, he argues, is that perfect merge. Looking at the deceptively simple sequence of 21 plexiglass squares, each with its own heavy iconology, the immediate impression is that there is a secret code that needs to be broken. The mystery language’s lexicon consists only of squares, and there is something of the binary code here: In place of the 0’s and 1’s that are the basis for every complex function a computer may perform, there are “open” and “closed” squares that can signify any number. On display are numbers one to 23. Well, technically, zero to 23.

“How could something as fundamental as black and white be numbers?” posits J.J. Le Tourneau, Ph.D., a Berkeley-trained mathematician and the artist responsible for the exhibit. “How could something hide in plain sight?” This was an idea that fascinated him as he created an iconography for his theory.

To understand how each sequence represents a number from one to 23, you’re going to need to remember your prime numbers. (Hint: a prime is a number whose only two multiplication factors are one and itself, such as two, the only even prime number.)

To see this in action, examine the image on page 14, starting in the upper left-hand corner. Keep in mind that every solid box represents two, every empty box, three. We’re dealing in multiplication here, and the purpose of any symbol or symbols within another box is to represent the number of which odd prime we need to be concerned with (for example, a black box within another box would be two, meaning we need to look at the second odd prime, which is 5). In the upper left-hand corner, we have four black boxes, signifying 16. Since the value of 16 is represented within this box, we know we are looking for the 16th integer, which is 59. So the upper quarter gives us 59.

In the lower right hand corner, we multiply the solid box by the empty box (two by three) and we have the number six, so we are looking for the sixth odd prime (17).

Confused? Take a moment to appreciate the intrinsic Art Deco feel of each of these images. Then find Paul Benavidez, who will be able to clarify.

Reflecting on the first panel of the installation, a solid black box, Le Tourneau muses, “We start with a void, zero, lack of information,” he said. “It becomes conscious in square one,” a seemingly empty square, boldly outlined in black, “and continues to hold everything all around.”

He compares this container to the file structure of iPods or the directory system on a personal computer, wherein the abstract is made solid by the simple opening of files. The drag-and-drop process we’re so familiar with has not a little in common with higher mathematical concepts.

“Numbers are schizophrenic,” Le Tourneau points out. “As in art, we’re saying, choices cause behavior to change. In psychology, we call it emergent behavior: A crowd will act differently than an individual. Behavior starts to get complex.”

Or, to put it another way, “Addition is for counting breadsticks; multiplication is putting your data together.”

By definition, combining data is not a simple one-plus-one process, but follows a method closer to multiplication. To illustrate his point, he talks about merging two different filing systems together on one computer. “We intuit that it adds together,” he says, “so how come it takes forever?” Simply put, two systems would not interact so simply, but the complexities of the systems interact in a behavior best compared to multiplication.

The format of the pieces, too, is deceptively simple: each form is an Epson digital print over plexiglass, which provides an unobtrusive background for the images.

“We see an outline and we are drawn toward the middle,” Le Tourneau points out. “Your eye’s not caught by the plastic edge; all action happens in the interior.”

“I’m not aware of a merging of art and physics this pure,” attests Benavidez. The exhibit is in keeping with his current vision, for as he says of the panels, “They have a uniqueness and they are hopeful. [The exhibit] certainly has mystery, has texture — all of the things that art is. They have a definite poeticism.”

There is something hopeful, too, about a seemingly complex system that has been printed onto playing cards and used to educate elementary school children, an achievement that underscores the Berkeley-educated mathematician’s varied career. After 20 years spent teaching at the all-African American Fisk University, the University of Massachusetts, California State University, San Francisco, and as a founding faculty member at Hampshire College, the Carpinteria resident moved into the software industry and currently holds 17 patents for his discoveries.

Le Tourneau has used these icons as a multiplication primer of sorts for students, and has field-tested his method in classrooms in Berkeley; Portland, Ore,; and Port Angeles, Washington. To date, two local third grade classes have come in to view the exhibit.

“You can walk into a class and say you’re going to think a thought nobody has thought of before,” Le Tourneau considers excitedly, adding that although his method is user-friendly once the user can grasp the ideas of prime numbers and multiplication, he has only mapped the iconography so far. 2007 is yet to be done, and he leaves that up to students.

It’s only fitting that this logician and data architect would be drawn to introducing another mathematical perspective to youngsters. “My background would lead me to want the simplest patterns,” he reasons.

He describes it as a Piaget experience, alluding to the Swiss developmental psychologist who studied cognitive development, specifically a child’s increasingly complex understanding of actions and the arrangement of objects and numbers. He has toyed with the idea of making the simple solid and empty squares into different colors, and out of various materials, to make them more kid-friendly. “I’m convinced that kids can color, stick, play with these,” he says of the objects that are arranged to ultimately represent a specific integer. “It doesn’t change the meaning.”

Sitting in one of the squared-off white chairs, furnishings that seem an extension of the installation itself, it’s easy to imagine many of these panels displayed in a modern (or, even, post-modern) living room. Seeing a sequence of 23 in its entirety, there is more than cold logic at play.