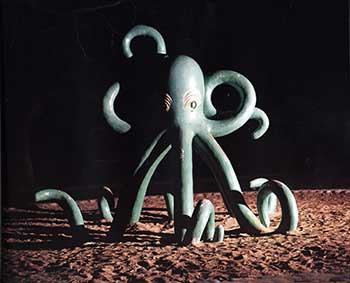 (ventura county reporter) Across the street from the Libbey Park playground — a child’s oasis in the oppressive Ojai heat — is what at first blush appears to be an homage to the chain ladders, monkey bars, and spring-loaded horses of youth: artist Aaron Plant’s More Playgrounds at the Nathan Larramendy Gallery.

But Plant’s photography casts communal play in a darker light as his pieces explore the liminal space of playgrounds between the hours of 11 p.m. and 3 a.m., a time when — as gallery owner Nathan Larramendy points out — there can be no innocent excuse to be there. Repeating a sentiment expressed by gallery curator and writer Laura Richard Jenku, he acknowledges, “Culturally, playgrounds are forbidden after dark.”

A smiling dragon by day becomes sneeringly menacing in the late evening, when little is visible beyond its spot-lit surroundings. The illuminated sand is washed out to appear snow-like, creating a wasteland of a kiddie playground.

Among the desolation, Larramendy points out, there is a sadomasochistic quality to many of the playground fixtures: the red “underwear swing,” the preponderance of chains, the hanging rings that bear an uncanny resemblance to handcuffs.

Iodine, a three-screen video installation which is part of the exhibit, is a collaboration between photographer Plant, painter Timothy Cummings, and producer Shane Francis.

The film opens in a blue-lit hallway, where the pitter-patter of little feet alternates between each screen, sometimes repeating itself slightly on the outer two, hinting at alternate camera angles. The children appear sporadically, at times sporting animal and clown masks.

Then everything turns a little sinister. A boy naps near a well-organized surgeon’s tray that is loaded with household instruments of torture: A pizza cutter, a meat tenderizer, a whisk and barbeque tongs lay in wait for a game of Operation gone awry. This indoor play, under the adult radar, is by turns highly imaginative and just a couple steps from depraved. A childish understanding of reality — that everything is still negotiable — blurs into cruelty as a young girl approaches her role of surgeon with a stern concentration, scrubbing her hands with the repetitive obsession of a real attending physician, demonstrating that in this world of role play, the performers have studied their parts with a child’s intense power of observation. The film resonates with anyone who has ever taken a pair of scissors to a younger sibling’s hair or terrorized the family dog with only the best of intentions.

“The installation was very successful at being able to reference each artist’s individuality in a very cohesive way,” Larramendy notes. As the theme of child’s play is carried over, there are several visual references to Cummings’ work, which alludes to Victorian aesthetics and features children in a state of self-transformative play — cross-dressing or entering the beginning stages of metamorphosis. Pieces like “Owl Girl Lives in the Garden” and “Bird Boy” are portraits seemingly from the old school, except that children sprout feathers without a second thought. In “43,” a young girl avoids puberty by swapping bodies with a Labrador (the poor dog is left to navigate cup sizes A, B, or C; the girl can run free).

For Plant, More Playgrounds is a natural progression in his exploration of the inanimate world’s symbiotic existence with the animate; his previous collection, Alone, stressed neglected objects, like an upturned Baby Shamu inflatable toy stranded in the middle of an untouched pool. More Playground’s evening backdrop also references his Nightlife series, where the after hours play of young children involved seemingly frivolous activities in a parent’s van or out in the backyard, but then transported the kids to more grisly realities.

But where Alone played with children’s tendency to neglect objects or leave them behind, Plant’s Not for Children series focused on silicon sex toys, colorful objects of wonder that underscore adult obsession and fixation.

“It’s really interesting with Aaron’s work with playgrounds, how people view it,” observes Larramendy. “Some people find it really playful and happy; I don’t find it that way. I see it as much more provocative than this happy memory of childhood.” But everyone responds to images of these highly recognizable spaces. “That’s what’s really successful about Aaron’s work; it’s this universal language we’re all familiar with. People who aren’t experienced in the arts aren’t fearful about having a conversation about it. They’re not intimidated.”

And with the lengthened summer evenings, More Playgrounds is all the more relevant for the young — somewhere between the Nightlife and Not for Children demographics — who will venture into these deceptively treacherous spaces.