SOUND OF MY VOICE

The blonde leading the blind. 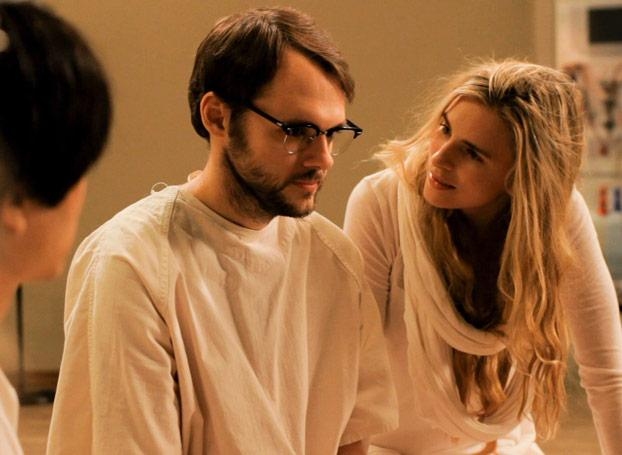 (willamette week) Tract houses and taupe shag carpeting: For the tight few opening minutes of Sound of My Voice, this is the mundanely hellish world of the modern cult. Peter and Lorna (Christopher Denham and Nicole Vicius) pull into a nondescript two-car garage and submit themselves to a kidnapping of sorts, under the guise that flexicuffs and hospital gowns are prereqs for meeting their messiah. In reality, they are aspiring filmmakers out to infiltrate the newest sketchy splinter of Southern California spiritualism.

It’s not fair to say lovers Peter and Lorna are ever at risk of being taken in. They’re bound to unravel on their own, on the outside. (Peter, in particular, is by turns reckless and at risk of disappearing into his neck beard.) But the cult of Maggie (Brit Marling), a fetching self-proclaimed savior who claims to hail from 40 years in the future, resembles a Silver Lake book club more than teeming masses looking for answers. Director Zal Batmanglij strives for psychological tension over much sense of immediate danger, throwing in low-budget smoke and mirrors to hint at actual risk. In the background of a generic condo-cum-temple, questionable hospital supplies lie about and unexplained blood transfusions happen regularly. Frail Maggie’s divinity is called into question by her casual drinking and late-night chain smoking.

We’re kept guessing to the point of absurdity, trying to piece together red herrings and a delightfully inconsistent genre. (Political thriller? Existential mindfuck?) Missed opportunities abound. Nowhere is this more glaring than character actor James Urbaniak’s cameo. “Menacing nerd” is Urbaniak’s calling card, but in a troubling subplot, he plays an affluent father who injects his obsessive-compulsive grade-schooler between the toes with an unknown substance. It matters little that Maggie wants to kidnap his daughter; the man’s talent is wasted in a role that serves only to unsettle.

After the mess that was Marling’s latest attempt (Another Earth), Sound of My Voice is blessedly free from pseudo-physics. No one does much to confirm or explain Maggie’s supposed time travel. But not only is there no real threat of where Maggie might lead everyone—it could be Santa Barbara just as easily as Jonestown—on the question of who or what Maggie is, it’s as if, after the Another Earth overreach, Marling and Batmanglij simply didn’t want to weigh in.