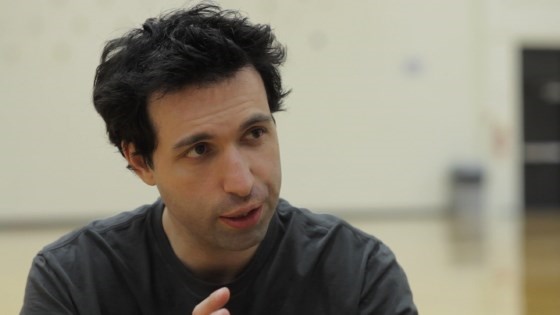 (ventura county reporter) Although listed as a “narrative feature,” we are never completely sure that the mysterious hole at the center of this film didn’t exist, or that producer/director/star Alex Karpovsky didn’t have a nervous breakdown while trying to produce the pilot episode of his fledgling “Provincial Puzzlers” TV series.

An aspiring filmmaker who makes his living editing graphics for karaoke videos, Alex hires his own crew and relocates to Brainerd, Minn., where the -20 degree temperatures have frozen all but one lake. Hopes of unraveling the mystery of the mile-and-a-half long stretch of unfrozen water are dashed when the hole mysteriously closes, sending Alex into a downward spiral of introspection.

Where the movie could have gone the expected route — metropolitan at odds with rural — Hole Story instead gives us a man with a deep reverence for the mysteries of life and faith. As the unshaven, disheveled Alex makes his rounds, filming interviews and attempting to salvage his expensive investment, the questions he poses are less about re-opening the mysterious void and more about redeeming himself. Alex’s motel bathroom confessionals to the camera, paranoid in nature, evolve from pep talks about the nature of filmmaking to comedic primal rage at his disappointing culture. Why can’t he have a Paul Bunyan, as the folks of Brainerd do?