THE QUEEN OF VERSAILLES

When the 1 percent defaults. 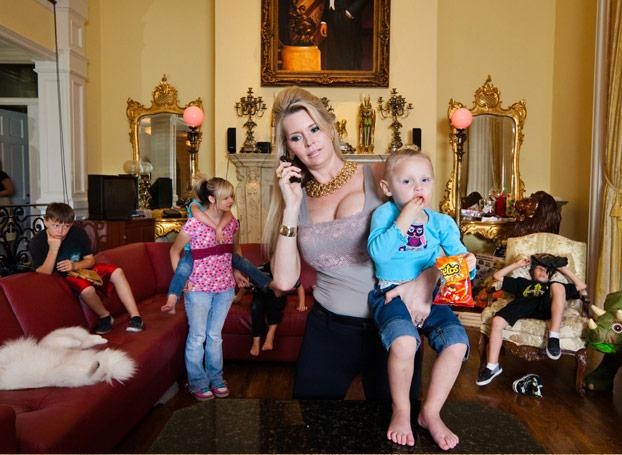 (willamette week) Meet Jackie Siegel. Half Miss Havisham, half Stifler’s mom, she presides—in a state of well-intentioned oblivion—over eight children and a gaudy empire in Orlando. Three years ago, she was meant to be the subject of a study on decadence. But in the middle of director Lauren Greenfield’s filming, the economy crashed, and this fortysomething trophy wife found her kingdom being foreclosed upon.

Were this not a documentary, it would all play out like a lazy satire as the easy ironies pile up. Jackie is married to David Siegel, a 70-ish grump. David peddles timeshares in Vegas to people who cannot afford them, a microcosm of the predatory real-estate practices that ultimately become the Siegels’ ruin.

The Siegels had started construction on what would have been the most expensive single-family residence in the U.S.: A 90,000-square-foot mansion that David and Jackie named—with no hint of prescience—Versailles. It’s an oversight that more time isn’t spent detailing the actual plans for the house; it would’ve provided some respite from the tense family dynamics, or the waves of schadenfreude.

When David’s largely speculative resort company begins to slip and Versailles is put on the market, he shows a startling lack of personal responsibility. He makes vague, unhinged accusations about “the banks” and retreats further into his study in an already palatial home where, as staff is laid off, dog shit piles up and any family pet confined to an aquarium quietly dies of neglect.

Greenfield provides perspective by profiling the Siegels’ employees, as well as a childhood friend of Jackie’s who is about to lose her house (despite the $5,000 Jackie provides). One of their nannies has left her own children behind in hopes of earning enough to build on a piece of land in her native Philippines, living (by choice, she claims) in the Siegel children’s playhouse.

Between the camera and Jackie there’s a sense of cautious intimacy; Greenfield seems to feel sympathy despite herself. Indeed, her relationship with Jackie remains fairly warm, even as David filed a lawsuit against Greenfield for allegedly making his business look bad on camera. But Greenfield hardly editorialized—this nouveau riche lifestyle was built on smarmy sales tactics from the start.