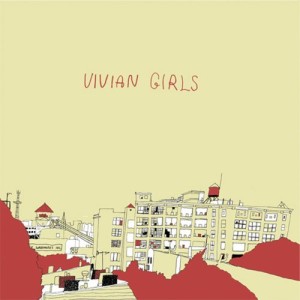 (venuszine) Cassie Ramone, Miss Frankie Rose, and Kickball Katy of the ragtag New York–based trio Vivian Girls have forged a harmonious group whose resemblance to a team of roller derby queens goes deeper than their stage names: deceptively simple lyrics, innovative twists, and dependable punk licks make for an offering both forceful and feminine. Measured vocals bring to mind the sometimes subdued, sometimes startling styles of notable songstresses from the Motown era. But instead of crooning, the Vivian Girls deliver deep sentimentality, hollered and chanted over thrashing guitar (opening track, “All the Time”) or cutely considered over a dependable drum line (“Going Insane”). The longing — that old familiar girl group stock-in-trade — is nailed perfectly in a three-part harmony laid over quasi-doo-wop rhythms in first single, “Wild Eyes.”

The lyrically monotonous but increasingly layered “No” pays homage to the group’s alt-rock roots, while the mournful, grinding “Never See Me Again” takes it down a peg with timelessly benign lyrics (“I had a really hard time walking down the street / Knowing you wouldn’t walk next to me”), at home in any decade of song, take on a gritty, heartbreakingly modern edge and hint at a darker issue than abandonment.

It’s fitting that the ladies christened themselves after the rebellious heroines of prolific writer-illustrator Henry Darger’s epic storybook. It isn’t that the content of their work centers around something as specific as a children’s civil war uprising, but the album’s organic arc — from a riotous lament about unrequited crushes to an upbeat, nihilist tirade at the close — is in its own way episodic. The pluck that Ramone, Rose, and Katy bring to the material is brash and wide-eyed, much like their namesakes.