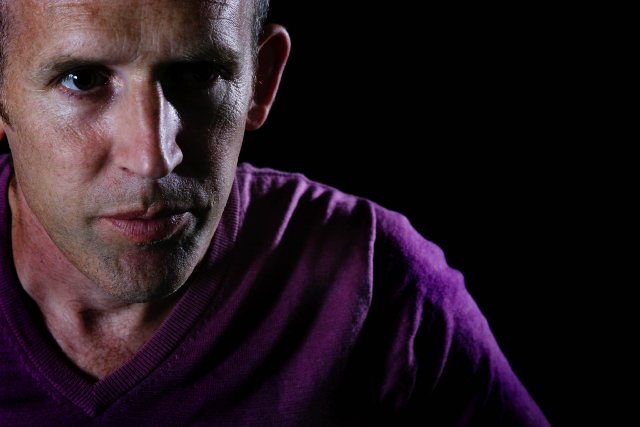 (vc reporter) One doesn’t take in a bit of Irish theater and expect to walk away uplifted. A general survey of those who have ever read, seen or heard about a play of Irish origin reveals what most audiences expect: a criminal element. Issues of poverty and nationalism. A dash of folksy existentialism.

The Good Thief opens with a few strains of “Jesus’ Blood Never Failed Me Yet,” a moving recording of a British transient singing a simple hymn, accompanied by the subtle orchestration of composer Gavin Bryars (gradually building in complexity until Tom Waits joins the old man). With its unsteady promise of redemption, the tune is a fitting accessory to Conor Lovett’s brash entrance. Playing a man we come to know only as the Thief, he takes his position in front of what appears to be a cement wall, a backdrop so stark we feel as though he may be facing off against a firing squad. And he is, in a manner of speaking: The audience serves as a casual tribunal of judges in this one-man show. And the Thief’s only motivation in telling his story seems to be to clear his name, despite his doubts about his own innocence. As he relates a domestic fantasy of settling down with a good, pretty woman, the sweet nothings he fantasizes about her whispering have little to do with his prowess or manhood. He imagines the woman of his dreams murmuring, “I’m not your judge.”

The tale’s end is not a foregone conclusion, and the Thief’s uniform — grey T-shirt, dress trousers and what appear to be black cowboy boots — does nothing to indicate his status. He may be a prisoner, outlaw or dead man in unfortunate burial clothes.

The story could easily be summed up in a few short sentences, but the Thief has a lot of explaining to do, and lays down the personal histories necessary to understand the story in a manner that, but for heavy implications, would seem to be coming at us from across the table during a friendly drink.

And never has a friendly drink seemed so ominous. It begins in a pub, where the Thief’s visit with a happy couple is underscored by his bitterness at a recent break-up. In the first few moments of our hour with this man, nothing is entirely safe; a heartbroken thug isn’t above anything. His warm, easy manner might be the hallmark of a sociopath.

As he slowly gains our trust and even sympathy, Lovett retains the spark of unpredictability of a man on the edge as he tells us about the Thief’s downfall: a scare job gone wrong. While working for his ex-girlfriend’s new meal ticket, he goes on a routine errand — shotgun in hand — to extort a local business-owner. When he arrives at the man’s house, bullets fly, and the Thief leaves in a Range Rover, the victim’s wife and toddler daughter in tow. He looks for a safe house as he tries to sort it all out — himself, his situation, his legal status.

On the road, he manages to flesh out his character not only to the audience but to his captives who, we soon discover, have been rescued from a pretty dismal scene. The Thief is a reliable narrator: so bare in his admissions, the audience experiences a marked shift from judging him to sincere concern. Nearly every character is guilty by association: hired mercenaries, opportunistic women, mindless muscle. When the Thief turns introspective and attempts to escape blame for the crime’s fallout, he presents a pretty solid case.

We experience his missteps, unshakable hangover and sense of despair. And then the clouds part as Lovett steps to the sunnier side of the stage, where whiffs of redemption provide the funnier moments of the play.

We are living in an age of the confessional; recent news events highlight the cathartic power of public admission — accurate or otherwise — and nothing sells quite like a juicy tell-all. This otherwise anonymous man exonerates himself by chatting with the audience for a little over an hour. He does not sugar-coat anything; when alluding to his failed relationship, he shies away, then quickly revisits the subject, and admits quickly that, OK, the perfect boyfriend he was not.

Lovett is directed by his wife, Judy Hegarty Lovett. Together they founded Gare St. Lazare Players Ireland and have racked up an impressive resume between them, ranging from socio-political improv theater to Beckett.

Conor McPherson, himself a founding member of a successful Irish theater troupe, has crafted a strong script that stays true to the one-sided dialogue of a recovering street thug — no small feat. That we are engaged by a one-man show starring a violent criminal is a testament to the airtight script and the strength of the performer.