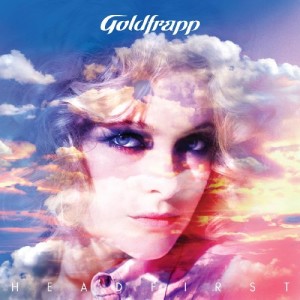 (venuszine) Goldfrapp has more than met its quota for experimentation. The electro pop duo’s first four albums spanned several genres to mine addictive beats and ultimately lure listeners into alternate realities. There was the twisted fairy tale landscape of Felt Mountain and the glamorously oversexed dancehall of Supernature. But sadly, Goldfrapp’s latest, Head First, isn’t just a departure?it’s a forced exile from the still-fertile fields of ambient electronica.

After the rush of euphoric underground clubs and enchanted forests, Goldfrapp takes us to yet another place that can only exist in the imagination: Xanadu, circa 1980 (a comparison the album art does nothing to distance itself from). Under the guise of “synth pop,” the electric chemistry between Will Gregory and Alison Goldfrapp settles into something like amicable nostalgia. In place of the sultry appeal of their past singles, the duo opens Head First with “Rocket,” a sure contender for any jazzercise playlist, while the album’s title track is a low-key hybrid of ABBA-esque hooks and Olivia Newton John’s spandexed roller rink ballads. The execution is too understated, and both tracks come off more as homage than winkingly ironic remixes.

But then a more authentic Goldfrapp resurfaces from the disco haze with “Dreaming,” a track that slows the frantic, strobe-lit pace of the album?s nine-song arch and gives us a proper groove. This track allows Alison the chance to emote seduction through her pores, thereby taking the edge off an album that could have been dismissed as a farce.

On a couple glorious tracks, Head First is a subtle return to Goldfrapp form, peaking with track “Shiny and Warm,” a showcase of the wry sexpot musings that are the front woman?s stock-in-trade. As uneven an experiment Head First is, the album ends on a redeeming note with “Voicething,” which features four straight minutes of Alison’s intoxicating vocals in a bizarrely celestial arrangement, making her the frontwoman all others will continue to orbit around.