JOHN LARSEN: A LIFE IN FILM 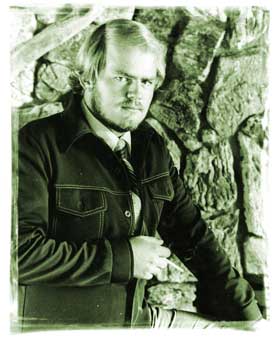 (ventura county reporter) It’s fitting that John Larsen is listed as one of 14 contributors to the DVD & Video Guide 2006, an exhaustive tome that encompasses every imaginable English-language film in circulation. Given his passion for the motion picture and his patience with every conceivable genre, the Santa Paula-born film critic might have been able to write the guide (with a small summary for each film) single-handedly.

Born in 1957, Larsen first pursued a career in on-air film review, but later wrote that a brutal car accident (and accompanying facial scars) during high school forced him to reconsider his direction. He parlayed his experience as a school newspaper editor, where he developed his long-running “Light Views, Reviews and Previews” column, to become the first editor-in-chief at Oxnard College’s newspaper.

Former Reporter owner Nancy Rick hired Larsen in 1977, two years after he had graduated high school and not long after he had begun working as a film critic for the Star Free Press. Rick welcomed Larsen, one of her first columnists, into the Reporter’s modest offices at the Wagon Wheel in Oxnard, “above the barbershop and behind the roller rink.”

“He had a great sense of humor, and his irreverence is so captivating,” Rick recalls. “I was so taken by his movie work.”

Larsen quickly amassed an enviable film library at the same speed he established important connections in Hollywood, gaining him entries to premieres, after-parties and park openings and allowing him to rub elbows with the luminaries he’d come to respect. Writing a 30-year retrospective about his tenure at the Reporter, Larsen listed his favorite career moments: The near-black tie festivities that marked ToonTown, Disneyland’s launch; exploring the back lots of Universal Studios the E.T. premiere and — far from Hollywood’s glistening lights and the glare of a television — river rafting in the grand canyon, a particular passion of his.

Larsen used his sixth sense for networking to benefit his hometown alternative newsweekly: advanced screeners immediately enabled a high-caliber film review section, and Larsen’s place atop industry guest lists widened the scope of the regional newspaper’s entertainment focus. With a finger on the pulse of home entertainment, Larsen pioneered the video review column (sensing, even in 1983, that videos would soon catch on).

While Larsen never gave a bad movie a pass, he brought his generosity of spirit and an intense appreciation for the craft of film making to every screening. A pop cultural bellwether, Larsen was never swayed by his reviewing compatriots. He hated Children of Men but often had a keen understanding for lighter fare’s right to exist (see: Phat Girlz review). He ignored his colleague’s complaints about the movie’s length to give King Kong (2005) a glowing review, focusing instead on the film’s brilliant cinematography and composition, as well as film maker Peter Jackson’s intense passion for the moving image.

While acting as the Reporter’s calendar and film editor, Larsen moonlighted as a contributor to Pasadena Weekly, San Diego City Beat and Santa Barbara Bulletin, hosted a radio review show for a time and cultivated a rich creative life in writing movies while viewing an estimated 400 films per year.

Larsen lived with his brother in Port Hueneme and leaves behind a staff and community of film lovers mourning the loss of an authoritative critical voice.