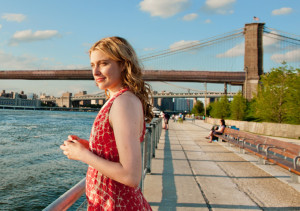 (willamette week) The business of rebounding is messy. Unfortunately, so is this script. Co-screenwriter Zoe Lister Jones, it seems, is using Lola as a vehicle to play a foul-mouthed wingman in an increasingly unpleasant, emotional slapstick. As Lola, Greta Gerwig appears to be the love child of Alicia Silverstone and Hope Davis, who occupied her own (far better) chronicle of the heartbroken condition in 1998’s underrated Next Stop Wonderland. That, at least, had a tone of solitude and reflection; Lola opts to lose her shit and steal forties from a sketchy bodega (and miraculously avoid theft/rape). See, she’s three weeks short of her own wedding (and in spitting distance of 30) when she’s given her marching orders by her pretty but less-than-compelling fiancé (Joel Kinnaman). Her subsequent suffering happens within the prism of upper-eastside privilege, where very little is demanded of her – not by her parents (Bill Pullman and Debra Winger), who own their own frequently-vacant penthouse and ostensibly support Lola as she finishes her thesis on uses of silence in French poetry. And her friends supplement her downward spiral, too – specifically Henry (Hamish Linklater), with whom she sometimes shares a bed but absolutely no chemistry. The uninteresting details of Lola’s process are from the book of break-up clichés: She eats too much, agrees to an ill-fated date with a certifiable weirdo (he rollerblades and listens to Ani Difranco during sex!), and hits on a friend who we (and she) are unconvinced is a good gamble. There’s little to no magnetism between any of the characters who are conveniently matched up, so the heartbreak and hope we’re prompted to feel is lazy and inauthentic. The combative title is cute, but in the end, we’re forced to conclude that Lola attempts to face down – with a whimper – some kind of adversity, but ultimately triumphs over nothing.