NO END IN SIGHT 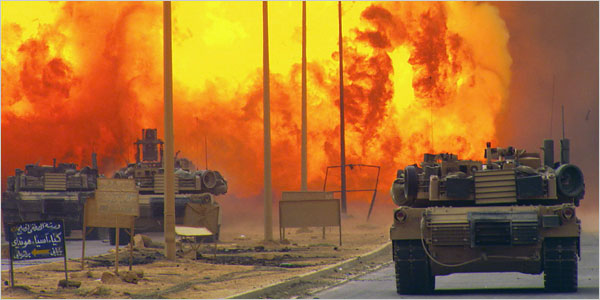 (ventura county reporter) Charles Ferguson’s No End in Sight is worth watching, if only for the intense (but separately filmed) argument between Col. Paul Hughes, Director of Strategic Policy for the U.S. Occupation, and Walter Slocombe, Senior Advisor for National Security and Defense at the Coalition Provisional Authority (and Hughes’ onetime superior). While Hughes argues against L. Paul Bremer’s 2003 decision to disband the Iraqi army — a choice which not only denied the U.S. Armed Forces local help, but which effectively stuck 500,000 armed men with unemployment — Slocombe feebly denies Bremer’s was a patently awful idea. While Hughes recalls the wealth of offers he received from qualified Iraqi military commanders with troops at the ready, Slocombe seems to remember that not being the case.

In light of Attorney General Alberto Gonzales’ recent Congres-sional testimony, which suggested half-assed stonewalling is the administration’s preferred rhetorical style, Slocombe does himself — and, in a larger sense, the architects of this war — in by adopting that tiresome toe-scuffling approach when denying what the rest of the film makes abundantly clear: mistakes were made — almost exclusively.

And so, without taking a position on the legitimacy of the Iraq war, Ferguson makes a devastating case for how little it would have taken to make postwar Iraq less of a hell, more of a purgatory.

The familiar cornerstones of the issue are laid out with witnesses from across the political spectrum: Marc Garlasco of the Defense Intelligence Agency recalls being asked to draw any relationship possible between Saddam and al-Qaeda; Omar Fekeiki, of the Baghdad bureau of the Washington Post, relays optimism that an invasion would effect positive change for his country. Footage of Gen. Eric Shinseki testifying that “hundreds of thousands” of troops would be necessary in the reconstruction is undercut by a quick reminder that Rumsfeld ultimately sent in only 160,000.

Then come myriad tales of incompetence and spectacularly bad judgment. Robert Hutchings, formerly of the National Intelligence Council, speaks of his agency’s pre-war report on the state of the insurgency in Iraq, a report Bush publicly referred to as “guesswork.” In spite of a one-page summary of “bad, worse and worst-case scenarios,” Hutchings says the president didn’t read any of it.

Most commentators are in agreement that Iraq was lost within the first month of occupation. Barbara Bodine, a career diplomat once in charge of Baghdad through the Office for Reconstruction and Humanitarian Assistance (ORHA), marks the looting of Baghdad and Rumsfeld’s failure (and refusal) to institute martial law as “the day that we lost the Iraqis.” While Lt. Seth Moulton asserts the Marines would have had little problem instituting order in chaotic Baghdad, journalist George Packer puts the cost of the looting at $12 billion (“the revenue in Iraq in 2003-04”); Atlantic Monthly National Editor James Fellows nails Rumsfeld’s hesitancy to declare martial law as a sort of leitmotif in examining Baghdad’s (and Iraq’s) decline, saying, “The greatest mystery of postwar Iraq involves that month or so after the fall of Baghdad of why the U.S. didn’t do anything to control the looting.”

The apex of the tale comes with Bremer’s inexplicable appointment as administrator of the Coalition Provisional Authority (CPA), the body that replaced ORHA. His three orders — “[stopping] the formation of an interim Iraqi government” (despite a general expectation that a sovereign governing body would form immediately); “De-Ba’athification” (which meant firing thousands of members of the professional class due to their involvement with Saddam’s political party); and disbanding the Iraqi Armed Forces and intelligence committees — are wistfully reconstructed by those who knew better. Namely, upper brass who had at least a passing knowledge of Iraqi culture and military strategy.

The title, at first, is at odds with the historical nature of No End, until a subtle blow in the final act brings the cost of war, and the seeming impossibility of any resolution, into painful perspective.

The evidence presented isn’t the result of Ferguson’s own investigative journalism, and any political junkie worth his weight in salt will spend the duration of the movie nodding in recognition. But in the genre of Iraq expository, No End sets itself apart from the crowd as a multimedia history book, bringing the past four years into digestible focus. In so much as anyone can create an Iraq documentary that is light on the pathos, Ferguson delivers an austere but methodic retrospective of a situation that is now unabashedly garnering Vietnam comparisons.