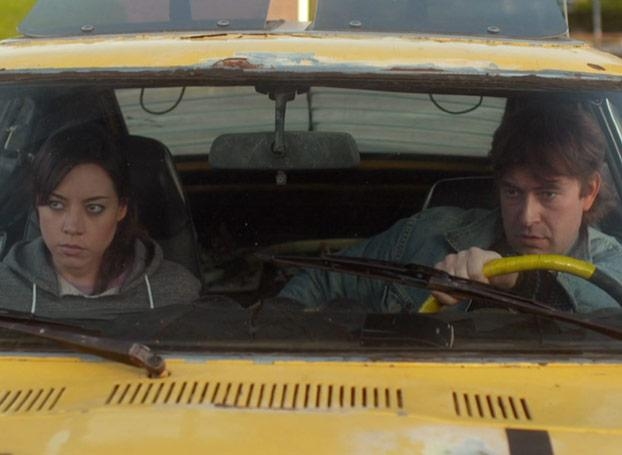 (willamette week) There is something heartbreakingly true in witnessing a wizened writer in his mid-30s demand of an intern, “Why are you sitting there in front of that screen? You’re a young man!”

Why are we sitting in front of that screen, indeed? That’s a truer basis for Safety Not Guaranteed than its origins as an Internet meme, a late-’90s want ad of sorts that sought a time-travel companion. For our purposes, screenwriter Derek Connolly has re-imagined the infamous clipping by tracing it back to a sleepy seaside town in Washington. It’s there that tenured magazine contributor Jeff (Jake M. Johnson) drags two listless interns (Karan Soni and Aubrey Plaza) in an attempt to secretly profile an earnest if unhinged grocery-store clerk who fancies himself a regular Doc Brown. The assignment is condescending, but everyone involved has baggage in their chronology, and a secret hope that the ad is true.

The skeptical trio stumbles onto what is possibly the greatest space-time paradox: You can never go back, except when you can. This is where the enigmatic Kenneth (Mark Duplass) lives. He’s set up as a former Boy Scout in a menial job, a survivalist with more than a passing interest in theoretical physics. But he finds an easy rapport with Darius (Plaza) that suggests he might be worth listening to, and the G-men who appear to be following him suggest that there is, in fact, a story here.

While Duplass has played complicated and nuanced before (see: The Puffy Chair), Plaza at first seems cast to do sullen-sardonic, her calling card on Parks and Recreation. But she shoulders much of the film with an unexpected charisma, as Darius’ flirty verbal sparring quickly turns to curiosity, then something like loyalty, toward Kenneth and his endeavor.

And it’s all so fully formed without being overwritten. This is the rare film where dialogue is natural; the major players gloss over their respective tales of love and loss, yet we know every detail through the kind of inference that makes us feel like a part of the conversation. Subtle, too, is what the film does with the source material—specifically, a line in the ad that reads “I’ve only done this once before.” Keep these words in mind. Without saying too much, I’d suggest they add a gratifying, if unspoken, subplot.