THE BUILDERS AND THE BUTCHERS 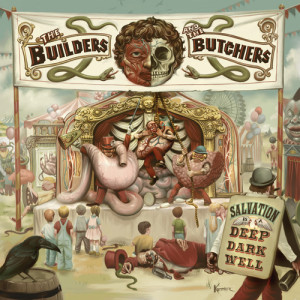 Salvation is a Deep Dark Well

Portland institution the Builders and the Butchers have created a genre best described as “doomsday jamboree.” The theatrical jam band borrows clanging, layered orchestration from bluegrass and tinges it with lyrics inspired by both gutter punk and American gothic folklore — ideal for a Stumptown fixture whose members all hail from the wilds of Alaska.

The Builders follow up their 2007 electric namesake debut with Salvation Is a Deep Dark Well, extending the Builders mythology without making the sophomore mistake of departing from what made them so great to begin with: a modern sensibility toward the dark and romantic side of early Americana. Singer-songwriter Ryan Sollee has the voice of an off-the-grid, fire-and-brimstone preacher, honed to front the frantic backwoods brilliance of a five-piece mash-up of banjo, mandolin, and hard rock.

But where their first offering was a winking tribute to the dusty, swampy, cocksuredness of early American folk rock, these good ol’ boys appear to have found love with Salvation — love of the “bloodied next to the railroad tracks,” “come live with me and sweat in my shack” variety. Death-knell intro track, “Golden and Green,” is fatalistic but romantic, with Sollee bending his nasally growl to beg, “Give me the rest of your years,” because (as he sweetly rationalizes), “Everything that’s golden and green / Goes to hell.” Their follow-up track is a logical proposition for a life in the inevitable but oh-so-homey hell of one’s own making: “Devil Town.”

From the Appalachian Trail to the Louisiana Delta, making use of everything from call-and-response choir to battle ballads, the boys take us on a tour through an epically majestic junkyard wasteland. And, in homage to an all-too-American mythos, they bring it all to an uplifting close with echoing redemption hymn, “The World Is a Top,” going acoustic and using the best of white gospel to resolve the album’s inferno-centric theme.