Everyday I Write the Book (And It Sucks) 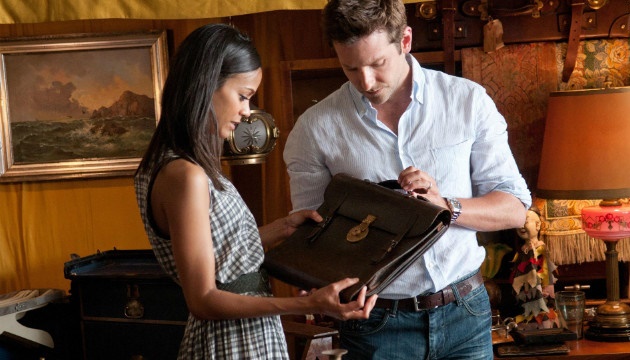 (willamette week) Bradley Cooper has played a convincing author in the past. In Limitless, he was a promising talent who whittled away his advance until he stumbled onto a kind of psychotropic form of Adderall that provided him intense focus and, ultimately, a completed manuscript.

That was a far more authentic view of the creative process than anything The Words offers up.
First-time writer-director Brian Klugman—Charlie from Cloverfield, if you will—never feigns any interest in the complexities of the publishing world, or even in the politics of interpersonal relationships. Instead, The Words registers as a mandatory Intro to Playwriting assignment, supervised by Nicholas Sparks.

Cooper plays Rory Jansen, an aspiring writer who manages to finish a book that is generally regarded as good, but which no one (least of all, Bob Balaban) knows how to market. Rory then stumbles across a yellowing manuscript and is so smitten with it that, for reasons that are never made clear—hope of osmosis?—he begins to type out the unpublished novel word for word. His wife Dora finds it and insists he show it to an agent, and the goofily charming Cooper plays his descent into plagiarism as a kind of accident. By the end of the film, it’s not entirely clear if he ever grasps the severity of his crime.

As Dora (Dora!?), poor, elegant Zoe Saldana is just set dressing, although she does confusingly bear much of Rory’s deflected sense of personal responsibility regarding the blatant plagiarism. See, she encouraged him to submit what she had every reason to believe was his own original manuscript. But Dora isn’t the best judge of modern literary tastes. Nor is Rory’s agent, who somehow manages to rush the book to press. Nor are the glowing critics who fall over themselves to promote Rory’s tale of post-partum depression in Paris.

In this clunky time-tripping narrative, we see the much-celebrated The Window Tears play out as told by the old man who actually lived and wrote it (Jeremy Irons, unconvincingly attempting to play 90). It’s not a compelling story. It’s much like listening to an elderly relative repeat a well-worn anecdote about living through the Depression—if, while politely listening, you’re secretly hoping the story might for once take a dark, sinister turn as the result of your relative’s advanced dementia. That was the expectation I had for the majority of The Words, because I couldn’t comprehend how the bland, sentimental story at the core of Window Tears promoted Rory as a literary wunderkind. There had to be more, I thought. There was not.

Klugman asks us to suspend disbelief a few too many times. The initial meeting between Cooper and Irons should be tense, but Cooper always seems a bit slow on the uptake, as though the director never quite explained plagiarism to him. In his performance, Cooper lacks any kind of intensity that would mark him as passionate about his craft. That Rory chooses to explore his amateur literary ambitions in Brooklyn—generally recognized as one of the most oppressively expensive rental markets in the country—is perhaps the most intriguing aspect of his journey.

The “lost love” issue at the heart of The Window Tears is equally confusing. Look, writers employ a number of destructive impulses to drive away significant others, but angst over the fact that their spouse lost the sole copy of their only novel is actually justifiable.

But there’s another level of literary clusterfuckery: All of this is framed within yet another book by supposed real-world author Clay Hammond (Dennis Quaid). His well-attended reading bookends (no pun intended) an already overly complicated narrative. But Klugman is not content to leave this as a simplistic—and pointless—novel-within-a-novel. He attempts to prove, perhaps, that we only write what we know. And to tease out Hammond’s pain, we get Olivia Wilde in the role of Daniella, a rather sociopathic fan who uses her sexuality to tease out an incredibly predictable plot development.