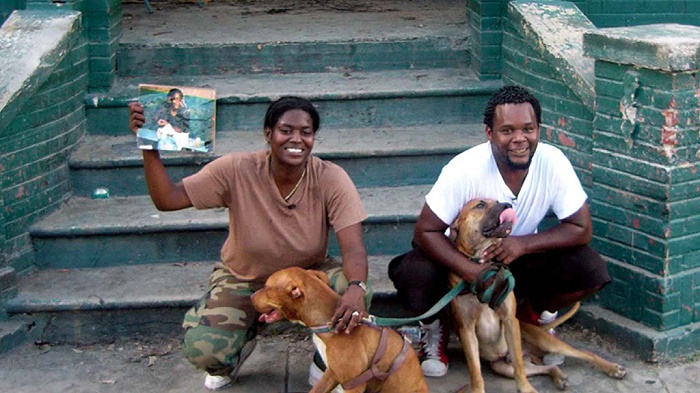 (willamette week) One Hurricane Katrina statistic that often goes unmentioned is how many filmmakers flocked to the aftermath, looking to tap into the personal stories of massive governmental negligence. So it was that Carl Deal and fellow Fahrenheit 9/11 producer Tia Lessin found themselves at a Red Cross shelter in New Orleans, interviewing evacuees, only to have Kimberly Roberts and her husband, Scott, walk into their frame.

Hailing from the submerged Ninth Ward, the Robertses offered a film clip that could easily have been lost on the cutting-room floor. In it, Kimberly insisted she has what nobody else did: extensive footage of the storm as it happened, taken on a handheld from an attic in one of the hardest-hit sections of New Orleans. Deal and Lessin ditched their original outline and took on the Robertses’ story, relieving the couple of camera duty as they blended Kimberly’s clips with their own and extended the scope of the Robertses’ coverage, following them to a family home in Memphis, doubling back to New Orleans, and winding up with the documentaryTrouble the Water.

The shelter meeting was a happy accident: Deal and Lessin couldn’t have scripted better narrators than this striking couple in their mid-20s whose own histories have weathered them a good 10 years. Kimberly was orphaned by HIV; Scott was a drug dealer on the path, by his own admission, to incarceration or death. In their unremarkable home, they were perfectly situated to become victims of nearly every kind of disregard that affected the region’s citizens after Katrina: They lived three blocks from a levee that ultimately failed and were a mere 10 blocks from a near-vacant naval base that could have provided shelter and resources for dozens of families but didn’t. (The base’s closed doors are never adequately explained by Navy officials, who admit they turned away desperate, displaced residents, apparently under a vague command to hold down the fort.) By filming their hell in real time, then returning with the producers’ backing, the Robertses provide a grounding context for facts and figures that might normally be tossed off and forgotten in an overload of outrage—an inevitable side effect of Spike Lee’s exhaustive When the Levees Broke.

Meanwhile the collaborators are tasteful in their use of a tried and tested—but arguably unavoidable—formula in the growing library of Katrina documentaries: You cannot show TV coverage or interviews with the authorities without using on-the-ground images to undermine it all. Deal and Lessin are sparing, allowing Paula Zahn to question the Federal Emergency Management Agency’s sluggish response time, but cutting then-FEMA Director Michael Brown off before he can voice a signature feeble reply. The film’s unusual, choppy chronology succeeds in bringing the focus back to the couple, making the chaos more comprehensible.

And then the Robertses offer up their own suffering for our eyes. Personal losses are fair game to give the film a tragic story arc. Not every neighbor whom Kimberly interviews in early, suspenseful pre-storm footage makes it, and in Tennessee, Kimberly’s uncle reveals that her grandmother died at Memorial Hospital (wrongly judged to be a safe haven); the woman’s funeral becomes a central part of the Roberts’ epilogue. Meanwhile, Kimberly’s wry buoyancy finds a natural outlet in dominating the film, but rather than alienating her audience, Kimberly energizes the material and keeps up the pace of the narrative. Even the rediscovery of her demo track gels, enabling Kimberly to break into an unexpected riff about survival (and show a flicker of promise as an up-and-coming rapper).

With three years’ worth of outraged hindsight to go on, the Robertses’ shaky-handed coverage and Deal and Lessin’s focus on storytelling make Trouble the Water a digestible account—and an indispensable supplement to our understanding of just what the hell happened in New Orleans.